A weekly meeting of families affected by substance abuse

At The White House, Learning How Not To Talk About Addiction 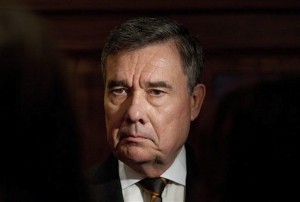 Gil Kerlikowske, director of the U.S office of National Drug Control Policy. (The Canadian Press/Pawel Dwulit Via AP) We don’t refer to someone who has anorexia or bulimia as having a “food abuse” problem. We say they have an eating disorder. So why do we refer to someone who is addicted to alcohol or pain pills as having a “substance abuse” problem? Harvard’s John Kelly, director of the new Recovery Research Institute at Massachusetts General Hospital, made that point this week at what was billed as the first-ever White House summit on drug policy reform. The Obama administration has moved far from the old “war on drugs” model. The current federal drug czar, Gil Kerlikowske, wrote in his email invitation to the summit: “Drug policy reform should be rooted in neuroscience, not political science.” And “it should be a public health issue, not just a criminal justice issue. That’s what a 21st-century approach to drug policy looks like.” Dr. Kelly, an associate professor of psychiatry, spoke to the summit-goers about the stigma around addiction — so pervasive it can even be seen in language. I asked him to elaborate; our conversation, edited: It seems clear that addiction is not a good thing. It can cause people many problems, even kill them. But you’re saying that the trouble with addiction stigma is that it goes beyond seeing addiction as bad, to actually blaming the addict? Yes. The degree of stigma is influenced by two main factors: cause — ‘Did they cause it?’ — and controllability — ‘Can they control it?’ We now know that about half the risk of addiction is conferred by genetics – what you’re born with. On controllability, neuroscience has also taught us that alcohol and other drugs cause profound changes in the structure and function of the brain that radically impair individuals’ ability to stop, despite often severe consequences. Okay, but what about the other half? There is some element of choice in addiction, at least initially, isn’t there? Addiction is like many other medical illnesses, in that there’s an interaction between the genetics and the environment. This makes some people more susceptible. For example, a lot of people are exposed to alcohol in our culture, but not everybody becomes addicted to alcohol. The genes may mediate the liking and wanting of that particular substance. For some people, alcohol is aversive for others, it’s kind of okay; for other people, it becomes everything. So genetics is related to the cause. Brain damage — the toxicity and profound alteration in neurochemical function and structure produced by these abnormally potent reinforcers — alcohol, heroin, cocaine — which causes brain damage — that’s the controllability part. And the language we use directly maps on to that issue of cause and controllability. The rhetoric and language of ‘the war on drugs’ talks about ‘abuse’ and ‘abusers’ and the new movement, toward smarter criminal justice and a more public health approach, needs to look at it as a medical condition and

talk about it as ‘substance use disorder,’ which is more accurate medical terminology. Why does it matter what we call it? The language we use to describe these problems may perpetuate stigma, and that can potentially harm patients and continue the suffering among families. New evidence indicates that the commonly used “abuse” and “drug abuser” terms, for example, are conceptually linked to the notion that individuals are at fault for their addiction and therefore should be blamed and punished. These terms fitted well with the “war on drugs” policy approach. In contrast, use of the more medical and scientifically accurate “substance use disorder” terminology is linked more to a public health approach that conveys the notion of a medical malfunction. We tested the effect of using these terms experimentally. We randomly assigned a paragraph vignette describing an individual in legal trouble due to alcohol and drugs; in half the vignettes the individual was described as “a substance abuser” in the other half he was described as “having a substance use disorder”; otherwise, the scenarios were identical.

(Courtesy J. Kelly) These were randomly distributed to more then 500 doctoral level mental health clinicians, many of whom were addiction specialists. They were asked to read the brief description and then answer some questions about their judgments on whether the individual described was more to blame for his violation and should be punished. Those clinicians exposed to the “substance abuser” term were significantly more likely to judge the person as more to blame and more deserving of punishment than the exact same individual described as having a substance use disorder. We tested these terms in a general population sample and found even larger differences with more negative and punitive judgments strongly associated with the “abuser” term. These findings indicate that,even among well-trained doctoral level mental health clinicians and addiction specialists, exposure to certain language may create an implicit bias that may result in harsher punitive judgments that perpetuate stigmatizing attitudes toward individuals and families suffering from addiction. These may create barriers to honest self-disclosure and seeking treatment for alcohol or drug problems. This is important as only about 10 percent of affected individuals seek addiction treatment each year and they site stigma as a major barrier.

John Kelly (Courtesy) Does this language effect, which you found makes mental health professionals more judgmental of people with substance use disorders, actually translate into problematic behavior? Like withholding care or benefits? We don’t know that for sure. That would be very hard to figure out. But what this research is suggesting is that it does produce a kind of implicit cognitive bias toward more punitive attitudes. We do know that attitudes predict behavioral response, however, and we’ve shown that language influences attitudes. So while we can’t prove it, there is a strong basis to believe that it could influence decisions such as withholding benefits or other things from individuals trying to recover from these problems. You pointed out at the drug reform summit that other mental health fields don’t use the term ‘abuse.’ Right. Individuals with ‘eating-related problems’, are uniformly described as ‘having an eating disorder,’ not as ‘food abusers.’ We need to do the same in the addiction field. Because the term ‘abuse’ gives rise to the ‘abuser’ term, it is better to use the term ‘misuse.’ Furthermore, given the lack of scientific specificity associated with the ‘abuse’ and ‘abuser’ terms, its nonuse would not result in any loss of scientific accuracy. When you spoke at the White House, did you explicitly propose that the nation’s drug czar and his staffs and law enforcement more broadly change their language? Yes, because while rhetoric around language has persisted for years, we now have good evidence that such terms may perpetuate stigma, and stigma is a huge barrier to seeking help. We need to adopt new language which is more consistent with a public health approach, more accurate and more consistent as opposed to the rhetoric and language of the past — the abuse terminology, which is more strongly associated with a war on drugs approach. One very inexpensive way we can start to alleviate this terrible burden of stigma, which prevents people from seeking treatment, is to drop the old language. Well, you’ll be up against some very ingrained linguistic habits — I mean, isn’t the federal addiction research agency called the National Institute On Drug Abuse? And you find it at drugabuse.gov. It could be quite an uphill battle to change this language. If I’d thought of it at the time, I would have said that we do need to change the names of these federal institutions, so they don’t perpetuate this old language. I think it can be an uphill battle, but a battle that is not that difficult to win if we’re really serious about making changes that have an effect on the prevalence of substance use disorders and their impact in the United States. It would reflect a shift toward smarter evidence-based policies. It’ll just be a matter of if we decide finally to let go of that language and adopt new language more fitting, more accurate, and more conducive to the new game in town as opposed to the older war on drugs. Please spell it out for me: You’re saying that whenever I would have said ‘substance abuse’ I now say ‘substance use disorder’ and for the person, I call them someone ‘with a substance use disorder’? For example, when we’re talking about it generically, instead of using the term ‘substance abuse,’ many have adopted the term ‘substance misuse.’ And instead of describing someone as a substance abuser or alcohol abuser or drug abuser, you talk about a person who has a substance use disorder or is suffering from a substance use disorder. More broadly, it’s the ‘substance use disorder’ field. It seems a bit odd when we’re not used to saying these things now; new terms can feel somewhat awkward and strange and foreign at first. But people adapt remarkably quickly; start using the new terms and they become second nature. Human beings are kind of resistant to change and our language is somewhat habitual, so it’s hard to shift our language, but we want to create a stigma against using stigmatizing language. Is there a new term for the drug policy that has succeeded ‘the war on drugs’? The medical model? The public health approach? Not formally yet. We could think of one — one that captures a public health and recovery orientation would be good. Readers, suggestions? And will you consider shifting to Dr. Kelly’s terminology? Why or why not?

Bridge to Hope is a support organization only and does not offer medical or psychological advice and is an outreach program the Passavant Hospital Foundation. Web design by Creative Courtney.